Is Chris Tucker married? No, he isn’t. However, he was previously married to Azja Pryor who is now residing in Los Angeles. With his ex-wife, Tucker is the father of a son named Destin. Regarding his present relationship status, he has been engaged to Fox anchor Cynne Simpson and some online sources have claimed that the duo has already been married.

Tucker also dated Vanessa Mendoza for two years ending their relationship in 2007.  He was also romantically linked with actress Indie Arie. Scroll down to explore more interesting personal facts and biography of Tucker:

Who is Chris Tucker?

Born as Christopher Tucker, he landed the planet on August 31, 1971, which makes his age be 49 years old as of 2020. By profession, he is an American actor and is also popular as a stand-up comedian. He is mostly credited for appearing in F. Gary Gray’s Friday as Smokey and in Brett Ratner’s Rush Hour film series as Detective James Carter.

In the 1990s, he became popular for frequently appearing on Def Comedy Jam as a stand-up performer. He is also credited for his role in the science-fiction action film The Fifth Element, crime thriller film Jackie Brown, romantic comedy-drama Silver Linings Playbook and action comedy film Money Talks.

Christopher was born in 1971 and his place of birth is in Atlanta, Georgia. He was born to the parents named Mary Louise (mother) and Norris Tucker (father). Out of the six children, he was the youngest son to his parents. He learned the importance of humor which could let him draw the attention of people and therefore developed his interest in humor and comedy.

Talking more about his family life, Chris’s father was an independent entrepreneur who used to own janitorial service. Tucker spent his childhood days in Decatur, Georgia, and went to Columbia High School to complete her graduation. After that, he moved to Los Angeles with a dream to pursue a career in acting.

Tucker appeared in the limelight after being frequently appeared on the HBO television series named Def Comedy Jam as a regular performer in 1992. From the 1994 comedy film House Party, he made his first cinematic debut and from his impressive performance, he started getting multiple offers for various comedy roles.

He became more popular from his role in 1995 American stoner comedy film Friday which also starred rapper Ice Cube. The year 1997 also turned to be a fruitful year for him as he appeared in action-comedy film Money Talks and English-language French science-fiction action film named The Fifth Element.

Tucker was also starred in Rush Hour, a 1998 martial arts action comedy film starring Jackie Chan and after that, Tucker continued his appearance in the sequel of the movie, i.e. Rush Hour 2 and Rush Hour. He was critically successful in his role as Detective James Carter. 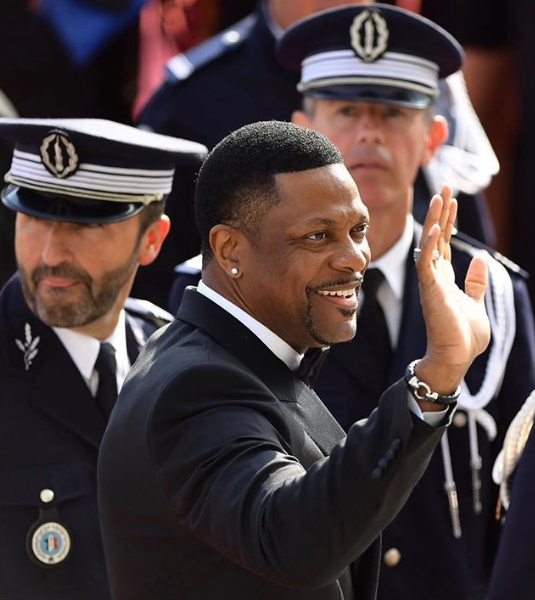 Tucker later was starred in Michael Jackson’s video titled “You Rock My World”. He was also one of the participants of the NBA All-Star Weekend’s Celebrity Game on February 13, 1999. Other participants include rapper/ businessman Master P, basketball players Clyde Drexler and Dominique Wilkins. An announcement was made that he alongside Frank Sinatra would be starring in the New Line drama film Mr. S: My Life in 2007.

As a stand-up comedian, he made a comeback in 2011. In 2012, he appeared in romantic comedy-drama Silver Linings Playbook which also starred Robert De Niro, Jennifer Lawrence and Bradley Cooper. His performance as Danny McDaniels in the movie made him receive the nominations for Screen Actors Guild Award. He also contributed to the 2013 BET Awards as a host.

Chris Tucker from his former wife Azja Pryor has a son named Destin. After the divorce, his son is living with Azja Pryor in Los Angeles. He has been linked with numbers of celebrities and is often the talk of the town because of his romantic relationship. Talking more about his personal life, he is a good friend with action king Jackie Chan who is his fellow Rush Hour co-star.

Further, he was also very close to Michael Jackson where he has appeared in MJ’s music video. You might be surprised to know that he is a friend of former President Bill Clinton with whom he has traveled overseas. According to PBS documentary, he has found to have the ancestry of European, African and Native American. Because of his profession, he divides his time among the major cities like Atlanta, Las Vegas and Bel Air. Regarding Tucker’s religion, he is a Christian where he grew up a Pentecostal Christian household. Both of his parents were the members of COGIC (Church of God in Christ).

Congratulations to my friend Jackie Chan for his honorary Oscars!

The comedian-actor Tucker stands at a tall height of 6 feet and 1 inch and weighs about 83 kilograms. He knows the importance of fitness activities and diet plans and therefore, Tucker gives high priority to his food and exercise routine. Tucker has black hair and eyes. As mentioned by some wiki sites, he needs to wear the shoe of a size of 12 (US).

The Rush Hour star Chris Tucker has an estimated net worth of 15 million USD. He is one of the highest-paid American stand-up comedians and has been able to make his movies commercially successful through his outstanding performances. As per the reports, he received the salary payment of 20 million USD and 25 million USD for his role in Rush Hour 2 and Rush Hour respectively.

He made a 40 million USD deal with New Line Cinema and was also eligible for receiving 20% of the gross from Rush Hour 3. For his role as Detective James Carter, he has earned multiple nominations and awards including Kids Choice Awards for Favorite Movie Actor and MTV Movie Award for Best Fight (with Jackie Chan).

Most of the popular wiki sites like IMDb and Wikipedia have provided the bio of actor Chris Tucker. He is also active on social media where Tucker’s Instagram account is reachable @christucker and Twitter profile @christuckerreal where he has garnered more than 1.7 million and 1 million followers respectively. You can also visit his Facebook Page @ChrisTucker where he is being followed by over 9,300,000  people.

Chris Tucker is one of the multi-talented comedian and actor who has been a source of inspiration for many new-comers. He was interested n having comedy talks from an early age and has turned his hobby into his profession. We have to choose the profession which our heart suggests not what the mind says. Take your own decision in life and remember that your best friend is none other than you, yourself. These are some lessons that we can learn from exploring Tucker’s biography.