Is David Muir married? No, he isn’t. However, he was rumored to be in gay relationship with his ABC News colleague Gio Benitez (born on October 29, 1985) who is known for appearing in television shows like Good Morning America, 20/20, Nightline and World News. However, the rumor proved to be false in September 2015 when Gio Benitez got engaged to his boyfriend named Tommy DiDario.

The reason behind the rumor about Muir and Benitez was their photographs which they took together several times. Muir’s sexuality is possibly straight. He was also rumored to have dated Kate Dries in late 2015. Scroll down to explore more interesting personal facts and biography of Muir:

Who is David Muir?

Born as David Jason Muir, he landed the planet on November 8, 1973, which makes his age be 47 years old as of 2020. By profession, he is an American journalist widely recognized for being the anchor of ABC World News Tonight. He is also noted for appearing as the co-presenter of the television newsmagazine 20/20 along with Amy Robach (born on February 6, 1973).

For his outstanding contribution and efforts in the journalism field, he has gained multiple Emmy and Edward R. Murrow awards. He has also contributed to ABC’s World News with Diane Sawyer as principal substitute anchor by succeeding her in September 2014.

Muir was born in 1973 and his place of birth is in Syracuse, New York, the United States of America. Talking about his family background, he was born to the parents named Ronald Muir (father) and Pat Mills (mother). His parents got divorced when he was in his high school. After the divorce, his mother moved to Skaneateles. Muir spent his early days in Onondaga Hill and was raised in a Roman Catholic family.

David is also blessed with an older sibling. His family members also include two younger stepsiblings. Every night, he used to watch the ABC News’ flagship program. He was widely inspired by Peter Jennings (July 29, 1938 – August 7, 2005) whom he considers as his biggest journalistic influence.

He was also influenced by one of his professors who used to tell him as “the cut of a TV Newsman”. He was also enrolled at the Institute on Political Journalism at Georgetown University. His academics also shows that he attended the University of Salamanca in Spain. He is also the receiver of honorary Doctor of Media degree from Northeastern University.

Muir was always inspired to have a journalism career from his young days. When he was in his high school, he used to go for part0-time job bagging groceries at Wegmans Fairmount. Later, he went for an internship at Channel 5. A year before earning his bachelor’s degree, he joined WTVH-TV in Syracuse, New York. There, he served as an anchor and reporter for which he reported from Jerusalem, Tel Aviv, Israel, and the Gaza Strip.

For his job, he was honored for Best Enterprise Reporting and Best Television Interview by the Associated Press. He was also named as the anchor of the “Best Local Newscast” by the Syracuse Press Club. Similarly, he gained more popularity after being voted as the “Best Local News Anchors” in Syracuse.

He joined WCVB television in Boston in 2000 where he remained until 2003 and worked as a reporter and an anchor. For his amazing investigative reporting, he was awarded the regional Edward R. Murrow Award. For tracing the hijackers’ path who were involved on September 11, 2001 attack, he was honored with Associated Press honors and the National Headliner Award.

He made a big breakthrough by joining the overnight news program World News Now as an anchor in August 2003. Later, he was selected as the anchor of World News This Morning which is an early morning newscast for ABC News. 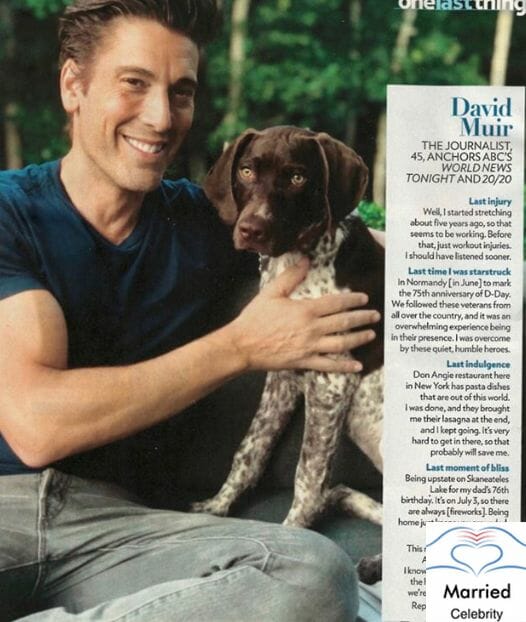 Along with a photographer, he walked through chest-deep waters in searching the patients trapped inside the hospital. He also occasionally contributed the newsmagazine Primetime as its co-anchor. In October 2006, he moved to the Israeli-Lebanon border for reporting on the Israeli war with Hezbollah.

In March 2007, he was stationed in Gaza for covering the Hamas coup. In June 2007, he turned as the anchor of World News Saturday. When Peru was hit by a massive devastating earthquake, he was dispatched there in October 2007. Following the Chernobyl nuclear accident, he reported from Ukraine in September 2008.

Along with Diane Sawyer, he reported a 20/20 hour about guns in America getting “disturbing results” in April 2009. His reporting on 20/20 was able to experience a growing number of audiences. Through his reporting, it was revealed that the number of homeless children is increasing rapidly in May 2009. He moved to the Gulf of for investigating the BP oil spill where he made multiple trips.

He moved to Haiti from where he reported the hurricane in April 2011 and also reported on the attacks made against women. During the political revolution in Egypt, he reported from Tahrir Square in June 2011. He also reported on the deadly tsunami and nuclear power plant accident from Fukushima, Japan. His reporting job also includes from Mogadishu, Somalia.

He also turned as an anchor for the weekend newscasts in February 2012 which was called World News with David Muir. He was in the highlight when he received a promotion by being appointed as the co-anchor for 20/20 with Elizabeth Vargas (born on September 6, 1962).

He was appointed as the ABC’s lead correspondents for the 2012 U.S. Presidential election in November 2012. His interview turned as the national headline when he interviewed Republican candidate Mitt Romney and discussed on topics like immigration policy and economics in the United States. He moved to Iran for the nuclear talks in early 2013. He reported Mogadishu, Somalia on the famine and was the first Western journalist to do so.

Along with his team, he came under fire while they were reporting from Mogadishu. He was able to receive the Edward R. Murrow Award in 2013 for his courageous and outstanding reporting jobs. He succeeded Diane Sawyer as the anchor and managing editor of ABC World News which was announced on June 27, 2014. “World News Tonight with David Muir” was able to become the most-watched evening newscast in the United States in April 2015.

He interviewed Bill gates and his wife Melinda Gates in April 2020 and discussed about the pandemic coronavirus. They discussed how the Americans could face the problems in the future along with the donations made by the couple.

David Muir isn’t married yet. He has no verified past and present relationship records and has always kept his love life details behind the curtains. The secret personal life has made him dragged into multiple rumors. He was supposed to be in gay relationship with Gio Benitez.

This relationship information proved to be wrong when Gio’s relationship with his partner Tommy DiDario was confirmed. Even the sexual orientation of Muir isn’t clear on the internet but there are high chances that he is straight. He lives with his pet dog named Axel in New York. He often uploads a picture of his dog on his Instagram account.

The anchor of ABC World News Tonight, David Muir stands at a perfect height of 5 feet and 11 inches or 1.8m. He weighs about 76 kilograms or 167.2 lbs making him have a balanced/ healthy BMI calculation. He is close to fifties in age but still looks like a man of thirties. The credit for his young appearance goes to his healthy lifestyle as Muir follows regular workout plans and remains under the nutritional chart.

One of the most-watched journalists from the United States, David Muir has an estimated net worth of 7.5 million USD. He is active in the industry since 1995 and has experience of serving as managing editor, television news anchor and television journalist. He has also delivered the commencement address at various educational institutes like the University of Wisconsin-Madison (May 12, 2018), Northeastern University (May 8, 2015) and Ithaca College (May 2011).

David Muir’s biography gives multiple lessons that are essential in everybody’s life. He followed a dream of being a journalist from his young age and the strong dream made him successful and reach the destination where he wants, and he deserves. His hard work and maximum effort has made him one of the renowned journalists in the country.