Following his great-grandmother Elizabeth, grandfather Fred, and father, Eric is a fourth-generation American businessman and former reality television personality. Adding more to his introduction, he is the third child and second son of President Donald Trump and mother Ivana Trump. Hailing from the businessman family, Eric had a normal family life, while his passion for business started to unfold since his child hook. Hence, the handsome hunk is famous as a trustee and executive vice president of the Trump Organization.

In this article instead of focusing on his political achievements, we shall highly concentrate on his personal life, his childhood, career progression, children, and his bonding with Donald Trump and his stepmother Melaine Trump.

The handsome American businessman was born as Eric Frederick Trump. Later, he got famous by his stage name Eric Trump. Born with the Aries zodiac sign while he celebrates his birthday every year on the 6th of January. He had opened his eyes in New York City, United States of America. Belonging to the white ethnicity while he holds an American Nationality.

Educational background of Eric Trump. Regarding her education, he had done his high school from the Hill School. After completing high school, he got enrolled at Georgetown University. Later, he graduated with a degree in finance and management.

Married or Dating? Find out his relationship

When it comes to the personal life of Eric he is a married man. The handsome hunk got engaged to his longtime girlfriend Lara Lea Yunaska in 2013. Professionally, she is an associate producer on the syndicated television news program Inside Edition.

Following the year of their engagement, they tied their knot on November 8, 2014.

In their conjugal life, they share two children. Before giving birth to their second daughter Carolina Dorothy Trump, Eric got to enjoy his Fatherhood by welcoming his first child, Eric “Luke” Trump on September 12, 2017.  After 2 years his daughter was born.

Recently, on the occasion of Father’s Day Eric shared a loving post of his children. Where his children made a loving drawing and wished him. 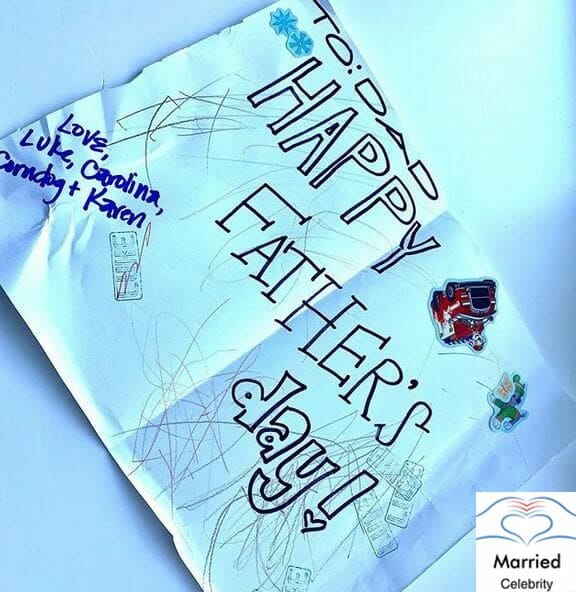 Eric is happily married. There is no news of him getting into any additional affair or divorce. He is a happy man, a loving husband, and a proud father of two children. In spite of getting involved in lots of political, social, and business affairs he has given fatherly and husband love to his children and wife.

Eric, the son of Ivana Trump and Donald Trump, had celebrated his total 36 birthday to date.  His father is the 45th and current president of the United States while his mother was a Czech-American businesswoman and former model.

When he was 8 years old, his parents got divorced. Thus, the handsome hunk spends his summers in the Czech countryside near Zlin with his maternal grandparents. Eric is not the single child of Ivana and Donald. He shares his parents with sister Ivanka Trump and brother Eric Trump. While he also has a half brother and sister, Tiffany Trump and Baron Trump, with two step-mother Marla Maples and Melania Trump.

Similar to other celebrities, he is blessed with awesome physique statistics. The dashing Eric Trump stands up 6 feet and 4 inches. Whereas he maintains his weight around 88 kg.  Similarly, he has an athletic body along with a couple of beautiful eyes.

His exact body measurement is not known, but he is a handsome man, with a great personality. We believe that he has no tattoo or piercing.

Talking about the professional life of Eri, he began accompanying his father to job sites and negotiations from a young age. Later, he became the executive vice president of development and acquisitions of the Trump Organization. There he worked with his sister, Ivanka, to redesign and renovate Trump National Doral and its Blue Monster course.

Similarly, he becomes the winner of Wine Enthusiast Magazine’s “Rising Star of the Year” Award. Apart from that,  he had also appeared in his father’s reality television series The Apprentice. There he appeared in 23 episodes. In 2007, he established the Eric Trump Foundation. The foundation is a public charity that raised money for St. Jude Children’s Research Hospital in Tennessee.

How much is his Net Worth?

As one of the renowned American businessman, philanthropist, and former reality television personality,  he had earned a huge name and fame in his lifetime career. As he is a businessman and the son of President Donald Trump, his asset is estimated to be around $ 150 million US dollars. While his salary is not known, we can assume that instead of taking a salary he might be taking profit shares from his investments and business.