Is Kelly Crull married? No, she isn’t. She hasn’t revealed anything about her relationship status and reports suggest that she is single as of now. She often shares her personal life stories on her Instagram account where she has uploaded pictures of her family members including father and brother. But she has never posted about the person whom she is dating or having a serious relationship. 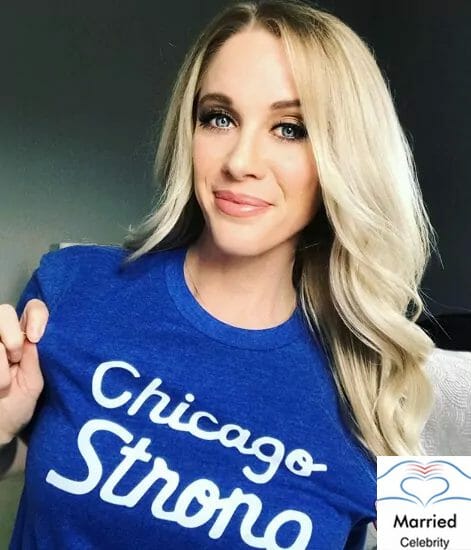 It seems like Crull hasn’t found the perfect partner in her life whom she can openly introduce as her husband. Previously, she was also rumored to have been dating boyfriend Chris Young who is a musician by profession. The rumor turned to be false as Chris Young has been dating another lady. Scroll down to explore more interesting personal facts and biography of Crull:

Who is Kelly Crull?

Born as Kelly Ann Crull, she landed the planet on February 16, 1984, which makes her age be 36 years old as of 2020. By profession, she is an American television and sportscaster. She has already served as a digital and on-air contributor for the Oklahoma City Thunder, Atlanta Braves, Chicago Bulls, San Diego Padres and Chicago Cubs. She is also recognized for having work experience at NBC Sports Chicago and Fox Sports.

Crull was born in 1984 and her place of birth is in Noblesville, Indiana, the United States of America. Talking about her family background, Crull was born to American supportive parents. She is very close to her family members and she has praised her father open through her Instagram account. On June 17, 2018, she uploaded her photograph with her father wishing a very Happy Father’s Day to him and thanked him for teaching to work hard and supporting her professional journey from the beginning.

She is blessed with a brother named Rob Crull whom she wished for his happy birthday on April 27, 2020, through her Instagram account. She stated that one of her reasons to smile is her brother. Regarding her education and academic achievements, she went to Noblesville High School where she was active in sports like tennis and basketball. Crull was a college tennis player and she earned a tennis scholarship from the University of Missouri. While being enrolled there, she studied broadcast journalism.

From her young age, she wanted to remain close to sports. She was very talkative and outgoing which turned fruitful for initiating her sportscasting career. She received her graduation from the university in 2008.

Crull initially worked for Columbia, Missouri NBC affiliate KOMU-TV, as a part of her undergraduate experience. She also went for an internship at the Indianapolis NBC affiliate WTHR-TV, CBS News Bureau in London and ESPN. She started her professional journey by joining CBS affiliate WLFI-TV at Lafayette, Indiana. While being there, she covered Indianapolis Colts, Purdue Boilermakers, Indianapolis 500 and Chicago Bears.

She was later employed by ABC affiliate KOCO in August 2008 for which she moved to Oklahoma City. She served as the weekday sports reporter and the weekend sports anchor while working there. She covered the Oklahoma State Cowboys and Oklahoma Sooners. From 2010 to 2012, she worked for the Oklahoma City Thunder as a sideline reporter for two seasons. She also worked for the Thunder’s pre-game show and weekly “Thunder Insider” show as its host.

Crull served as the co-host for the sports trivia show Beer Money. The hosting job took in February 2018 during its 100th episode. She also worked for the network as the Chicago Bulls sideline reporter for the 2018-19 season. For covering the Atlanta Braves, she joined Fox Sports South in 2020.

Kelly Crull isn’t married yet. She has remained silent regarding her love life or relationship status. She is reported to be single and is strictly focused to her professional sportscasting career. She has never revealed or provided any hints about her love life through her social media handles. Crull is very close to her family members which is clear from her social media handles. In June 2020, she uploaded a full-black colored image for supporting the Black Lives Matter movement.

American sportscaster Kelly Crull stands at a tall height of 5 feet and 8 inches. She weighs about 57 kilograms which makes her have a healthy BMI calculation. As per some online records, she has a perfect body statistic of 37-26-37 inches. During her free time, she enjoys playing tennis and make ensures that she is having regular workout activities. She has adopted a healthy lifestyle which is essential for her profession.

Kelly Crull has an estimated net worth of 1.2 million USD. She has made a successful journey in the broadcasting industry since after her graduation. She has interned for multiple networks before starting her professional journey. She has earned both fame and popularity from her roles as a sportscaster and television personality. At present, she is currently employed by Fox Sports South. The exact amount of salary earned by Crull from her employer isn’t provided.

There are multiple lessons that one can learn from Kelly Crull’s biography. She started her career from internship and today she is one of the renowned television personalities. Everyone should have trust in themselves like Crull. If you want to reach the height, you must start your preparation from the ground level. Remain close to your family members as they are the source of inspiration and your life-time well-wishers.