Is Jamie King married? The American actress/ model is a divorced woman. She has not been much open about her past relationships and boyfriends except for one. The famous relationship she had with the director Kyle Newman (born on March 16, 1976). Jaime and Kyle started dating while they were shooting for fanboys and after that, the duo moved in together immediately. They had a grand wedding in 2007 and really enjoyed their time together. The couple decided to abolish their wedding in 2020, thus filed a divorce. Jaime is believed to be having a boyfriend currently but not much has been opened up from her side.

Who is Jaime King?

Jaime King is a brilliant actress and an equally successful model. Known for career-defining roles and a great number of modeling projects, she has been living in the mind of viewers for her extraordinary performance in every field. Struggling and passing the numerous hurdles of her personal life, professional life, and health conditions Jaime has always been on the virtuous side of life. Often confused with supermodel Jaime Rishar, she was named James by her modeling agency. She also was staged with other names like Jaime Kyle, and James King in order to differentiate from Jaime Rishar.

How old is Jaime King?

Jaime Kyle was born on 23rd April 1979 in Omaha, Nebraska in the United States of America. This makes her age King’s age 42 in 2021 according to the bio. Even though King’s age suggests to us about her nearing the entrance to the middle-aged group, he body and personality says different. Her feet, amazing tattoos, and above all a child-like heart make us think differently about her age.

Where is Jaime King from?

As mentioned earlier, Jaime King was born in Nebraska. She is American by her roots and has been residing in the nation since her birth. Currently, she is living in Los Angeles with her son.

How much is Jaime King worth?

Jaime King’s estimated net worth is 8 million US dollars. She has been living a grand life in her luxurious bungalow in LA. Her annual earning is around 700k US dollars.

Does Jaime King have a child?

Yes, Jaime king has two sons but she struggled a lot for this. Jaime was suffering from PCOS and endometriosis. She had five miscarriages and also suffered an ectopic pregnancy. Her first son was born in October 2013, five months after announcing her pregnancy. Her second son was born on July 16, 2015. It might be interesting to our readers to know that popular singer Taylor Swift is the godmother to King’s second son.

Body Measurements; Does Jaime King have a tattoo?

Jaime King has an amazing height of 5 feet and 8+1⁄2 inches and she weighs around 53 Kilograms. Jamie has slim feet and fits body structure along with 17 tattoos. Yes, Jaime has 17 tattoos and she is a freaking tattoo lover. All of her tattoos have different meanings and she glorifies each of them as a sign of victories she has achieved in her life.

Jaime King and Taylor Swifts are best of friends and are extremely inseparable. The duo shares a strong bond of friendship for years. Taylor Swift is even the godmother of Jaime’s son. This helps in estimating the level of togetherness this two have. 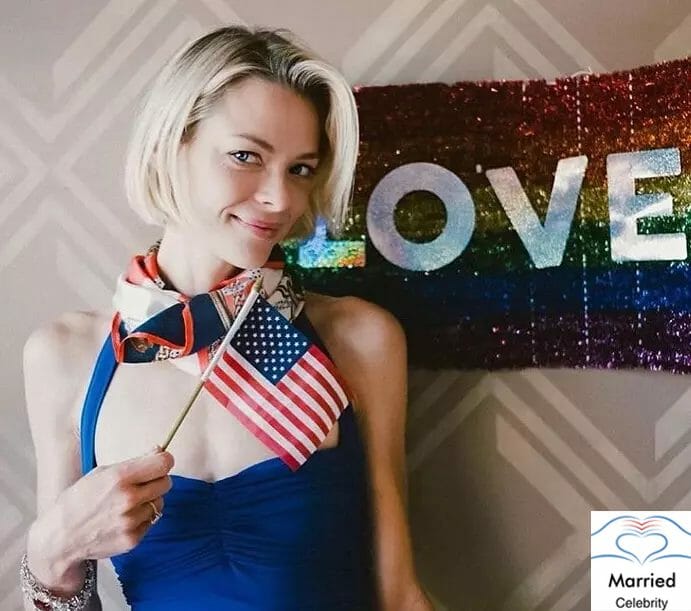 Jaime started her career in 1993 as a model when she was just 14. After working for a couple of years in the modeling world, she decided to try her luck in acting and started auditioning for several roles. She got her break-in music videos in 1998 and TV shows in 2001 along with the movies too. She has worked in some of the famous TV shows like Love Bites, Black Summer, The Class, and Gary is Unmarried. Talking about the movies she did, it includes Out of Death, Bitch, Fanboys, They Wait, The Spirit, and many more. After acting, she has also tried her hands in direction and directed two short movies, they are The Break-In and Latch Key which were loved and acclaimed by the viewers.

Net worth: US$8 million (estimated)