Is Jason Backe married? Yes, he is. His husband/ partner’s name is Ted Gibson (born on November 15, 1965). His partner is an American salon owner, independent hairdresser, celebrity hairstylist and influencer. The couple is having a happy same-sex married life together. They exchanged their vows on 13 August 2014, in New York City.  Their wedding event was named the ‘Wedding of the Year’ by The Modern Salon.

Who is Jason Backe?

Jason Backe is an American colorist and entrepreneur. Most credited as a highly accomplished color artist, he is famous in both Los Angeles and New York City. Further, he is co-owns Ted Gibson beauty with his partner. His color is appreciated for its chic and complimentary wearability and is the priority of multiple A-list celebrities. He has already worked with popular celebrities like Ashley Greene, Christina Ricci, Priyanka Chopra, Idina Menzel, Anne Hathaway, Lake Bell and Elettra Wiedemann.

His hair color works are popular among the top modeling agencies in New York and many models prefer to have his service for appearing in the top fashion and beauty campaigns. He has also been featured on various ad campaigns launched by influential hair color companies. He was also featured on beauty segments on the Oprah Winfrey Show, the Rachel Ray Show, Good Morning America and The Today Show. 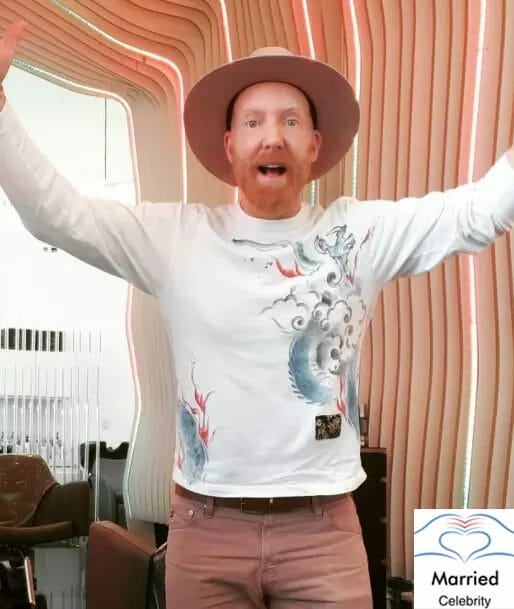 His clients are happy for his excellent service and outstanding abilities to offer practical advice and is also quoted by top beauty and fashion publications like The New York Times Sunday Styles, Cosmopolitan, Marie Claire, Elle, Allure, InStyle, Glamour and Cosmopolitan. He has also written for the Milady Cosmetology Standard Text Book 2016 edition.

Jason Backe was born on January 15, 1969, which makes his age be 52 years old as of 2021. His place of birth is Minnesota, the United States. From a young age, he developed an interest in glamour, design, fashion and business.

Best known as an accomplished celebrity colorist, Backe is known for being the co-owner of Ted Gibson Beauty where he serves as the Chied Executive Officer (CEO). He is also the co-creator of Starring by Ted Gibson which has been offering salon and various hair products including shampoo, hairdryer and so on. He has earned several prestigious recognition including being named as Celebrity Colorist for L’Oreal Professionnel. He has also been serving The Colorist by remaining in its color advisory board.

American hair colorist Jason Backe stands at a tall height above 5 feet and 8 inches. He belongs to a white ethnic background and often carries a beard or mustache or both in his face. He carrries an impressive personality and his humbleness is one of the best traits he carries. He has maintained cordial relationships with other enowned pesonalities in the entertainment pesonalites. His appearance and fitness is the result of his seriousness in his workout plan, diet chart and positive thinking.

Jason Backe has an estimated net worth of US$3.1 million. He has been making an impressive amount of financial return through his contribution in The Staring by Ted Gibson where his other team members are his husband Ted Gibson (as founder and hairdresser), CoCo Alexandar (hairdresser) and Johnny Bueno (colorist). He has worked with various celebrities like Priyanka Chopra, Ashley Greene, Renee Zellweger, Lake Bell, Anne Hathaway, Christina Ricci, and Idina Menzel.

The biography of Jason Backe is prepared by various wiki sites but is still missing from Wikipedia and IMDb. He is active on Instagram  @jasonbacke where he has amassed more than 81k followers. Join him on Twitter @JasonBacke where he has garnered 7k followers.

Net worth: US3.1 million