Is Joel Dommett married? Yes, he is. His wife’s name is Hannah Cooper who is a model noted for being signed to Next Model agency. The couple came in touch online through Instagram. They started dating in late 2016. They announced their engagement in late 2017. They finally celebrated their wedding in 2019. Scroll down to explore more interesting personal facts and biography of Dommett:

Who is Joel Dommett?

Born as Joel Patrick Dommett, he landed the planet on 8 June 1985, which makes his age be 35 years old as of 2020. By profession, he is an English actor, comedian and television personality widely recognized for his appearance in comedy-drama television series Skins, BAFTA award-winning television series Live in Chelsea, reality televisions series Impractical Jokers UK and so on. He is also noted for serving as the host of The Masked Singer UK.

Dommett was born in 1985 and his place of birth is in Rockhampton, Gloucestershire, England. Talking about his family background, he was born to educated English parents. His mother’s name is Penny Dommett but the details of his father aren’t available. Joel has appeared in The Cathy Brown Show with his mother and shared his early life funny moments. In 2007, he played the role of Josh Tyler in BBC One’s crime drama Inspector Lynley

Talking about his education and academic achievements, he went to The Castle School in Thornbury. He was one of the members of the band called Cyrus during his teenage days. At the age of 19, he moved to London.

Joel started his television acting career by doing small roles which also include newsreader in MTV News. He appeared as Jonathon Hansell in the medical drama series Casualty in 2004. The following year, he appeared as Dale Harper in The Golden Hour and Cory in comedy-drama television series Totally Frank.

He started his stand-up journey from Los Angeles and has performed in multiple locations like The Netherlands, Gravesend and Reykjavik. His outstanding performances made him earn the Best Newcomer award in 2008. He also turned as the finalist in Stand Up Comedian of the year in 2008. The same year, he appeared as Josh in British sitcom Teenage Kicks and as a soldier in a Second World War drama, The Edge of Love. The following year, he served as the co-host on Paul Foot’s podcast for twenty episodes.

He played the role of DC Sweeney in comedy-drama television series Skins. He gained wide public attention after serving as the host of a live discussion show called Live in Chelsea at the beginning of 2011. He also worked as a contributor for the BBC Three’s Pop’s Greatest Dance Crazes. He also served as the presenter of the EMA Voices 2011. From 2012 to 2014, he was starred in the first two series of Impractical Jokers UK on BBC Three. He also turned as the co-presenter of Channel 5’s How To Survive A Disaster Movie.

He appeared as a guest in BBC Three comedy panel show Sweat the Small Stuff and CBBC’s children’s panel show The Dog Ate My Homework in 2013 and 2014 respectively. He also turned as a team captain in Reality Bites, a comedy show on ITV2 in 2015. He also appeared on Nicole Scherzinger’s team on Bring the Noise on the Sky 1 panel show as a regular panelist. He is also the author of a memoir named “It’s Not Me It’s Them” published in 2017.

Dommett participated in the television program “I’m a Celebrity…Get Me Out of Here!” in November 2016 where he lost to Gogglebox’s Scarlett Moffatt and secured second place. He served as the co-presenter of ITV2’s I’m a Celebrity: Extra Camp from November 2017 until December 2019.

Joel Dommett is a married man. He is having a perfect time together with his spouse Hannah Cooper. Cooper is a model by profession. The couple hasn’t welcomed any children together and seems not in a hurry to expand their family life soon. They are very close to each other and their strong bond makes less chance of the pair getting separated or divorced. 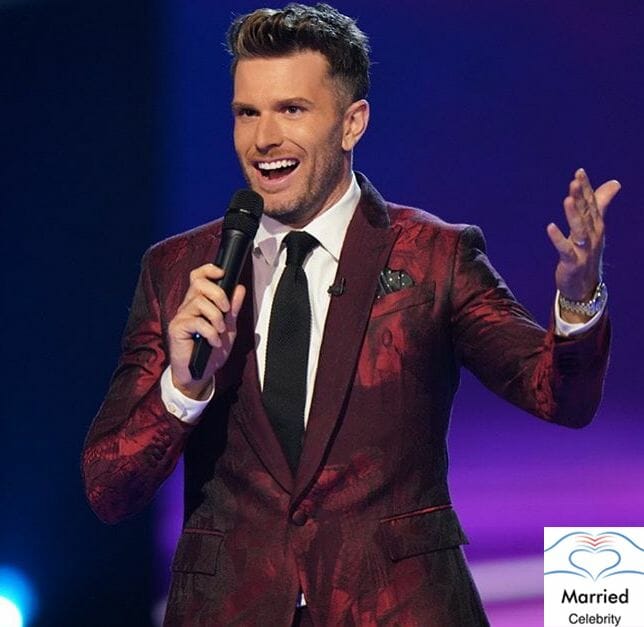 The presenter of The Masked Singer, Joel Dommett stands at a tall height of 5 feet and 10 inches or 1.78 m. He weighs about 75 kilograms which makes Joel carry a healthy BMI calculation. His chest, waist and biceps measure 41, 32 and 16 inches respectively. Being physically fit and active is mandatory for his professional life and remain competent in the entertainment industry.

English comedian Joel Dommett has an estimated net worth of 2.5 million USD. He is active in the industry since 2007 and is mostly noted for his presenting roles in various television programs. He has also authored a memoir. Within a short period of time, Joel has retained a roster of followers.

Joel Dommett always carries a cheerful personality and his sense of humor has always attracted people near to him. He always creates a positive atmosphere and inspires people to adopt a happy lifestyle. He is a successful presenter, actor, comedian and writer. There are multiple lessons one can learn by exploring Joel’s biography.