Is Kayla McBride married? No, she isn’t. Her fans seem to be curious in knowing who is Kayla’s husband or partner. Her relationship status is single and she doesn’t have a boyfriend or husband in her life. McBride is strictly concentrated on her sports career and she doesn’t want to risk her professional journey by being in a relationship that can mentally busy her.  Most of her personal life details are kept behind the curtains and thus, she is able to avoid unnecessary controversies. Scroll down to explore more interesting personal facts and biography of Kayla:

Who is Kayla McBride?

Kayla McBride was born on June 25, 1992. Considering her date of birth, she is 28 years old as of 2020 and her zodiac sign is Cancer. She is a famous WNBA (Women’s National Basketball Association) star who is noted for playing with Las Vegas Aces which drafted her in the 2014 WNBA draft. She has also gained huge success in her overseas and was signed with UMMC Ekaterinburg of the Russian League in 2018.

Kayla was born in 1992 and her birthplace is Erie, Pennsylvania, the United States. She is the daughter of LaMont McBride (father) and LuAnn McBride (mother). She is blessed with two sisters named Karlee McBride and Jayden McBride a younger brother named Jaren McBride. The four siblings have memorable childhood days which they spent together with their parents.

Talking about her education and academic achievements, Kayla attended Villa Maria Academy which is located in Erie, Pennsylvania. She was coached by Scott Dibble and was a four-year letter winner at Villa Maria. She served as top reserve (“sixth man”) on the Class AA state runner-up squad in her freshman year in 2006–07 season. There, she averaged 6.7 ppg with a .740 free throw percentage. She was able to garner the Swin Cash award (2007) as Western Pennsylvania’s Freshman of the Year. For her higher studies, she joined the University of Notre Dame. Because of her academic issues, she sat out half of the season as a freshman. Her team lost to Texas A&M in the 2011 NCAA Championship during which she was watching from the sidelines. Later, she appeared in 19 games of the season and averaged 8.7 points with shot .557 making her the third-highest from the team.

She appeared in all 39 games of her sophomore season where she started in 36 out of 39 games. She was ranked fourth in her team where she averaged 11.6 points per game.

Kayla was drafted by the Texas-based San Antonio Stars during the 2014 WNBA Draft which turned to be limestone in her professional journey. She started in all the 34 games averaging 13.0 ppg for the season. She was able to be voted into the 2015 WNBA All-Star Game during her second season. She completed her third season with a career-high of 17.1 ppg. She went from a right foot injury in a match against the Minnesota Lynx on July 2, 2016.

San Antonio Stars was relocated to Las Vegas, Nevada in 2018 and later renamed to Las Vegas Aces. She re-signed with the team in March 2018. Her best season career came in 2018 where she scored a new career-high of 38 points on June 28, 2018. She was voted into the 2018 WNBA All-Star Game for the second time in her career. American basketball player Kayla McBride isn’t married yet. She is about to reach her 30s as of now and she might start a new relationship soon. However, she seems in no hurry to get married as she is experiencing a successful career and is dedicatedly focused on it.

Women’s National Basketball Association star Kayla McBride stands at a tall height of 5 feet and 11 inches (1.80 m). Being a sportsperson, she has maintained her weight to 79 kilograms or 174 lb making her carry a healthy BMI calculation. Remaining fit and adopting healthy lifestyle is mandatory for her professional life. She ensures her fitness following healthy routines which include scheduled workout and diet chart.

McBride’s Salary and Net worth

Las Vegas Aces player Kayla McBride has an estimated net worth of 2.1 million USD. Kayla’s average salary is 116,000 USD. She has experienced a successful basketball playing career and has been able to be named in the different prestigious lists. She is the receiver of EuroCup winner (2017), Turkish Cup winner (2017), WNBA All-Rookie Team (2014) and was named WNBA All-Star three times in 2015, 2018 and 2019. 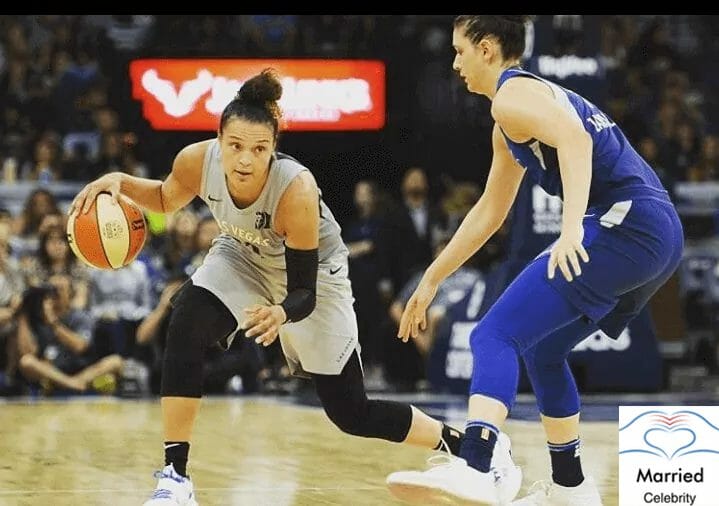 Manu of the popular wiki sites like Wikipedia have provided the biography of three times WNBA All-Star, Kayla McBride. Join her on twitter @kaymac_2123 where she is being followed by more than 30k followers. Find her on Instagram @kaymac_21 where she has garnered over 65k followers.

Three times WNBA All-Star, Kayla McBride is a successful basketball player. She has earned fame and popularity through her WNBA career. She puts her entire effort into her profession and is credited for her hard work and dedication.