Is Marieke Hardy married? No, she isn’t. However, Hardy has been in the relationship multiple times. Her first crush’s name is either Michael J. Fox or Morten Harket who was a member of pop group A-ha. She fell in love with a footballer when she was 20 years old., her Boyfriend was also a writer and musician. 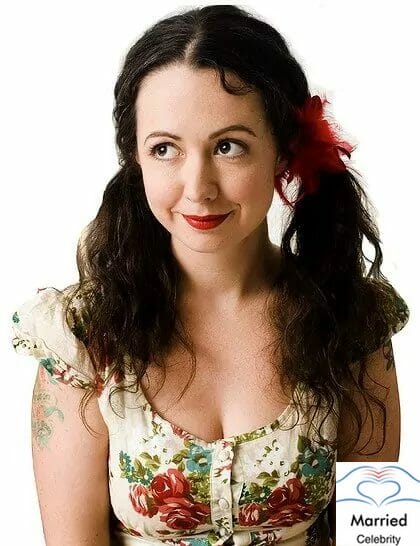 Hardy has been now living a single life and she describes being independent in the world is joyful. She has also cleared that she is a romantic person and loves men. Scroll down to explore more interesting personal facts and biography of Hardy:

Who is Marieke Hardy?

Born as Marieke Josephine Hardy, she landed the planet on 26 May 1976, which makes her age be 44 years old as of 2020. By profession, she is an Australian writer, television personality and former television actress. She is also noted for her contribution as a television presenter, producer and screenwriter.

Hardy was born in 1976 and her place of birth is in Melbourne, Australia. Talking about her family background, she was born to the parents named Alan Hardy (father) and Galia Hardy (mother). Many people recognize her for being the granddaughter of famous Australian novelist and writer Frank Hardy, (21 March 1917 – 28 January 1994) who wrote the popular 1950 historical novel Power Without Glory.

She is also the grandniece of Mary Hardy (14 October 1931 – 7 January 1985) who was a famous actress, comedian, writer, television and radio presenter. Regarding Marieke’s education and academic achievements, she was enrolled at Carey Baptist Grammar School. for her higher education, she attended Swinburne Senior Secondary College in Melbourne.

Hardy started her acting career from her young age. She appeared as Sally Marshall in television series The Henderson Kids II. In 1991, she contributed as a writer for All Together Now. She was seen in drama TV series R.F.D.S and comedy sketch and satire show The Late Show in 1993. The following year, she appeared in television soap opera A Country Practice.

From April 1996 to December 2007, she contributed as the co-host of Melbourne’s 3RRR radio show Best of the Brat under the pseudonym Holly C. It was popular among the youngster and was also called “the most immature show on Australian radio”. Later, she started working for Triple J, the ABC’s youth radio station where she co-hosted the breakfast show. In order to allocate time and dedicated work to her writing career, she quit her co-hosting job at Triple J in December 2009.

She contributed as a writer for Neighbours where she also played the role of Rhonda Brumby 1995–2003). In 1998, she was seen in television series Raw FM, police drama television series Stingers and children’s science fiction televisions series Thunderstone. In 2001, she wrote for various episodes of television programs like McLeod’s Daughters, Always Greener, Wild Kat, Horace and Tina and Something in the Air. She penned a blog titled Reasons You Will Hate Me where her pen name was “Ms Fits” which was able to earn the Bloggie award for Best Australia/New Zealand blog. Because of her other writing commitments, she left the “Green Guide” in November 2009. With publishers Allen & Unwin, she entered a two-book deal. In 2011, she published her first book called You’ll Be Sorry When I’m Dead, After that, she started writing her second book, a novel.

Australian radio and television personality, Marieke Hardy isn’t married yet. She had entered a relationship that turned out to be a failure because of many reasons including her professional life. She has been enjoying her independent life which has made her give more time for her professional life. NO doubt, Hardy’s sexual orientation is straight.

Marieke Hardy stands at a tall height above 5 feet and 4 inches. She never wants to compromise her professional journey for which she has adopted a healthy lifestyle. Hardy has a healthy BMI calculation as she remains under a controlled diet and regular workout activities.

Beauty with the mind, Marieke Hardy has an estimated net worth of 4 million USD. She has proven her success and abilities in multiple fields which include in acting, writing, producing and so on.  Likewise, her blogs have also made her earn prestigious awards. She joined the annual Melbourne Writers Festival as the event’s Artistic Director which was announced in August 2017.

The biography of Marieke Hardy is prepared by various wiki sites like IMDb and Wikipedia. Join her on Twitter @mariekehardy where she has amassed more than 125k followers.