Is Rob Andrew married? Yes, he is. His wife’s name is Sara Andrew. The couple dated for a long time together and their attachment made them celebrate their wedding. From their conjugal life, the pair welcomed three children together named Emily, Beth and Lola Andrew. Scroll down to explore more interesting personal facts and biography of Andrew: Who is Rob Andrew?

Born as Christopher Robert Rob Andrew, he landed the planet on 18 February 1963, which makes his age be 57 years old as of 2020. He is famously known as squeaky is one of the most profound English Rugby Players and the Rugby Director at the RFU. He had a brilliant domestic and International career graph. The flying half of England also got an opportunity to captain his side for 2 matches. Rob also played cricket in his early days representing his University. A lot of description which adds light to the player’s wiki is included below.

Contents hide
1 Rob’s Early life and Education
2 The journey of Rob’s Career and Professional Life
3 How is the Personal Life of Rob Andrew?
4 Body Measurements and Appearances
5 How Much is Rob Andrew’s Net Worth?
6 Wiki and Other Facts
7 Conclusions
8 Quick Facts

Robert was born in 1963 and his place of birth is in Richmond, England. Andrew went to Barnard Castle School along with Rory Underwood. From a very young age, he was highly interested in Sports. After completing high school he went to St. John’s College affiliated to Cambridge University. He started playing first-class cricket for his University and went on to play for the Yorkshire County Club later on. He completed his graduation and left the study to focus more on sports.

The journey of Rob’s Career and Professional Life

Andrew’s Domestic career started with Nottingham in 1985at the age of 22. Further, he played for other domestic Rugby teams such as Wasps, Toulouse, and New castle Falcons. The star player made his international debut in January 1985 against Romania. Later on, he became the regular fly-half of England for 10 years.

His Journey in International Rugby ended in 1997 A.D, till that time, he had established himself as one of the most prolific fly-halves of the Rugby world. Andrew scored a mammoth total of 396 points while representing England in 70 matches.

Three grand slam titles and the highest score of 30 points in a single match against Canada are some other feathers in his hat. Post playing, Rob has involved himself actively in the management and marketing of the sport. He served as the director of Elite Rugby and also worked as RFU’s Director of Professional Rugby. The legend was inducted to World Rugby Hall Of Fame in 2017.

How is the Personal Life of Rob Andrew?

Rob is a happy family man and has been living a well-settled life with his wife and kids. He married his long-time girlfriend Sara and now the couple has 3 kids Beth, Lola, and Emily. His wife Sara Andrew is often seen accompanying him on several sporting occasions; they both make a very lovely couple.

Robert Andrew was a robust and muscular player.  He is 5 feet and 9 inches tall and weighs around 76 kilograms. His dress and shoe size are 4 and 8 respectively. The tall and fair former Rugby player has dark brown eyes and hair. Due to all the hard work out regimes and strict fitness routine he follows, Rob looks quite younger than his age. 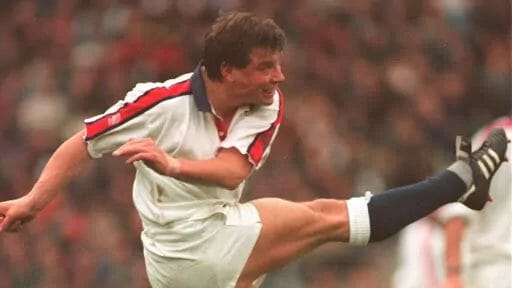 How Much is Rob Andrew’s Net Worth?

Squeaky is an extremely hard-working guy and loves hustling over his job. He also has a lot of side income sources. Rob’s estimated net worth is around 5 million U.S dollars. He lives in a lavish Mansion in Cambridge and possesses some highly luxurious cars.

Wiki and Other Facts

The biography of Rob Andrews is provided by various wiki sites including Wikipedia, Join him on Twitter https://twitter.com/robandrew19 where he has amassed more than 3k followers.

Due to the high amount of craze for cricket in England, Rob thought of being a professional cricketer and joined a lot of clubs during his early age. He was a left-handed batsman and right-arm off-spinner who played around 17 first-class games and 11 List-A games.

Later on, when he started playing Rugby, he discovered a different joy and satisfaction and chose the game professionally. Rob is a great fan and admirer of cricket and is seen supporting the England Cricket Team a lot. He enjoys the game a lot.

Many people are afraid regarding their future when they thought to pursue a career in a sports field. People are scared about their professional journey and found themselves in a dilemma. Rob has inspired and encouraged thousands of youths and shows them the scope of sports.