Is Atem Chigvintsev married? Regarding his current relationship status, he is engaged to retired professional WWE wrestler Nicole Garcia-Colace aka Nikki Bella (born on November 21, 1983). They celebrated their engagement in Burgundy France in November 2019. They were seen participating in the 25th season of the dance competition television series Dancing with the Stars where they were eliminated on October 30, 2017. The couple announced that they were expecting their first child together on January 29, 2020. They became blessed with a son named Matteo Artemovich Chigvintsev on July 31, 2020.

When did Artem Chigvintsev and Nikki Bella meet?

Chigvintsev met wrestler Nikki Bella for the first time in 2017 when both of them were participating the dance competition show Dancing with the Stars. During that time, Bella was close to John Cena and nothing much had happened between them. Later, they managed to start a new relationship which has now made them become parents of a baby boy. 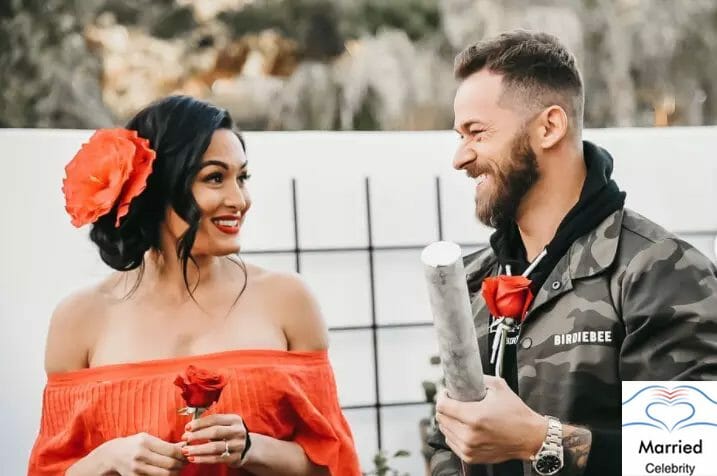 Talking about his past relationship, he was previously married to Giselle Peacock. He met his first wife in 2003 in Blackpool at a dance championship. They married in November 2004 at the local courthouse. However, they encountered disputes where Peacock accused Chigvintsev of using her for obtaining a Green Card and grabbing opportunities in the United States. Their divorce was finalized in the year 2006.

After the divorce, he was in a relationship with American dancer/ choreographer Carrie Ann Inaba (born on January 5, 1968) om 2006. They were spotted publicly together but got separated in November 2008. It might be interesting to our audience to know that Chigvintsev is 14 years younger than Inaba. His relationship history shows him being linked with actress Kara Tointon which was publicly announced in late 2010. In 2014, they ended their relationship following long-distance and conflicting work schedules. The Russian-American dancer also dated actress Torrey DeVitto where they were seen attending various programs together including the charity event, Philosophy Hope & Grace Luncheon.

Who is Artem Chigvintsev?

Born as Artem Vladimirovich Chigvintsev, he landed on the planet on 12 June 1982, which makes his age be 39 years old as of 2021. By profession, he is a Russian-American professional dancer who is mostly appreciated for being specialized in Latin dancing. He won multiple dance competition titles in Russia in his teenage days after which he obtained training in Germany, England and Italy.

He moved to Los Angeles in the year 2004. His early professional step includes being a contestant on the first series of ‘So You Think You Can Dance.’ He joined series eight of ‘Strictly Come Dancing’ as one of the line up of professional dancers in 2010 where he won the series with his celebrity partner Kara Tointon.

He partnered with actress Holly Valance in 2011 where they reached week 11 of the ninth series of Strictly Come Dancing. He partnered with Fern Britton in 2012 and the following year, he was seen partnering with Natalie Gumede. 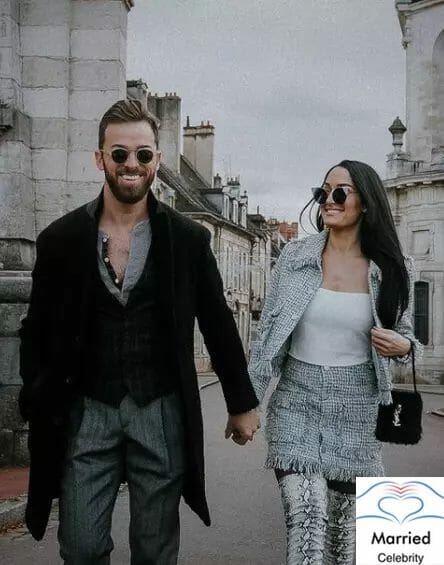 In 2011, he also toured with the Strictly Come Dancing arena tour where he partnered with Kara Tointon. He also served as the choreographer of BBC One’s ‘So You Think You Can Dance’ in the second series. He also holds the Guinness Book of Records where he set a new world record of 79 botofogo steps in 30 seconds.

In order to focus on gaining his American Citizenship, he participated as a Troupe Member Season 18 of Dancing With The Stars (DWTS). He was named as a new Pro on Dancing With The Stars in September 2014. He partnered with his Celebrity Partner Lea Thompson in the Season 19 of DWTS where they secured 6th position.

With his celebrity partner Patti LaBelle, he participated in Season 20 of Dancing With The Stars in March 2015 where they got eliminated in Week 6. He also filmed a few scenes of a movie called ‘Shines’ in September 2015. The movie is about two brothers both being Salsa dancers who got unified after the death of their father. He was also the Poster dancer for season 21 alongside Peta Murgatroyd as a part of the Professional Dancing cast.

He has also worked on 2016 American musical romantic comedy-drama film, La La Land which starred Emma Stone and Ryan Gosling as an aspiring actress and jazz pianist. He also worked for the Waltz scene by assisting Choreographer Mandy Moore. He has also appeared as body double of Ryan Goslings. He toured the United States on the Dancing With The Stars ‘We Came To Dance Tour’ 2016/2017. He also participated the Season 24 of Dancing With The Stars where his partner was former Olympic Figure Skater, Nancy Kerrigan.

He also served as the Mentor on the new Dancing With The Stars: Juniors. He also choreographed the SYTYCD Contestants (9/9/19) alongside Sharna Burgess. His next appearance was on a reality game show in the UK, Coach Trip. 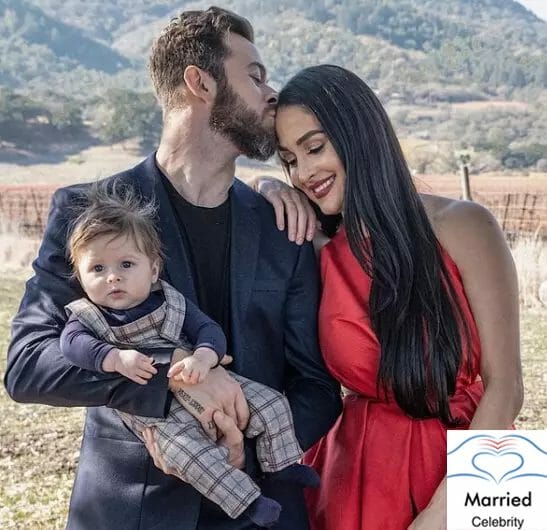 He appeared on Season 5 of Total Bellas starring his girlfriend Nikki, her sister Brie and wrestler Daniel Bryan. He joined Season 29 of Dancing With The Stars partnering with Canadian television personality/ podcast host Kaitlyn Bristowe in August 2020. They became the winners of the competition on the season finale marking Chigvintsev’s first win as a professional on the show. This also made him become the only professional dancer to win both the original (UK) version of Strictly Come Dancing and DWTS. After the birth of his son, he dedicated him the Season 29 with the hashtag #forteo.

Personal Life; Passion as a Biker

DWTS Mirror Ball Winner Chigvintsev is a keen biker who owns multiple branded motorbikes including a Ducati Scrambler and a Custom Harley Davidson. He is also an avid fan of Formula 1. Further, he loves to spend time in the kitchen where he often shares various recipes through his Instagram handle. He resides in Napa, California with his fiancée Nikki Bella and son Matteo.

How tall is Artem Chigvintsev?

Russian-American professional dancer Chigvintsev stands at a tall height of 5 feet and 11 inches or 181 cm. He weighs about 80 kilograms or 176 lbs and has maintained an athletic physique. One of his distinctive body features includes his cropped beard and mustache. As pe some online sources, his chest, arms (biceps) and waist measure 45, 16 and 33 inches respectively.

Who are Artem Chigvintsev’s parents?

He developed the love and passion for dancing from his mother. She inspired and encouraged him to attend dance classes from a young age. 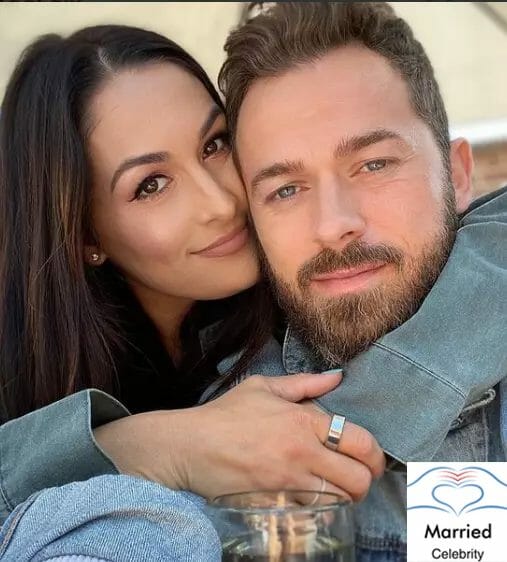 Is Artem Chigvintsev a wrestler?

Dancer Artem Chigvintsev has an estimated net worth of US$5.8 million. He also contributed to promoting Pink Label riding by using a Street Glide Motorcycle as a part of Harley Davidsons Pink Label Campaign for Breast Cancer in October 2015. One of his biggest professional achievements includes being nominated in the category of ‘Outstanding Choreography for Variety or Reality Programming’ for an Emmy Award on July 13, 2021.

The bio of Emmy Nominated Choreographer Atem Chigvintsev is prepared by various wiki sites including Wikipedia. For business inquiries, one can contact him through his website where he is available for Brand Collaborations, Choreography, Personal appearances, Charity and Corporate events, Demonstrations and Shows as well as private and group lessons. He is active on Instagram @theartemc with more than 1 million followers. He is also active on Twitter @artemchigvintse with more than 187k followers. 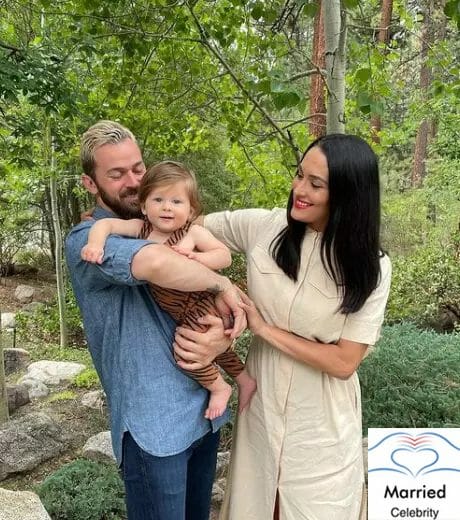 Net worth: US$5.8 million (estimated)