Is Kyle Carlson married? Yes, he is. His wife’s name is Jessica Hall (born on June 21, 1983) who is better known for being an actress, radio personality and widely recognized for her appearance in the popular E!’s reality television show series, Kendra. The lovely couple got married on May 16, 2008.

They are experiencing a happy conjugal life together through which they are now blessed with two children. On May 29, 2015, they welcomed their first child as a daughter named Sophie Carlson. On September 4, 2017, they welcomed their second child as a son named Jake Warren Carlson who weighs 7 lbs, 12 oz at the time of his birth. The beautiful pair seems to be enjoying their married life at its best where Kyle is often mentioned by Jessica on her Instagram handle @jessicahall.

Who is Kyle Carlson?

By profession, Carlson is an American male fashion model. He is better known together with his twin brother named Lane Carlson as the Carlson Twins. The brothers have already worked together for various brands including Calvin Klein. 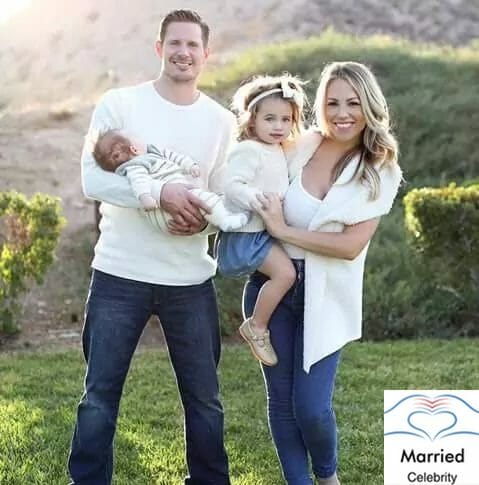 How old is Kyle Carlson?

Kyle Carlson was born on December 24, 1978, which makes his age be 43 years old as of 2021. His place of birth is in Stillwater, Minnesota, the United States.

Kyle Carlson was born in 1978, six minutes earlier his twin brother Lane Carlson. He grew up with Lane, a younger sister named Lynnaya and two older siblings named Aaron and Michelle Carlson. Talking about his parent’s profession, his mother used to work as a nursing assistant. Likewise, his father named Rick used to run a construction company.

Regarding his education and academic achievements, he went to Stillwater High School, alongside his twin brother. Both of them earned their graduation majoring in business from Winona State University.

The professional model from Stillwater, Minnesota started his professional career in early 2000 when they were discovered by the fashion scouts in Minneapolis. In his early career, he was managed by David Love who represented Elite Model Management in Chicago. With his brother, he has become a globally recognized successful model. Because of the often homoerotic imagery of their photoshoots, the twins turned gay icons although they were heterosexual.

To date, he has worked with various renowned brands and products including Armani, Abercrombie and Fitch as well as Out Magazine. With his brother as “Carlson Twins”, he has worked frequently as underwear models with Calvin Klein. The brothers also made their appearance on the television program called Mobile Home Disaster in 2005.

He used to be regularly featured at the half-hour show Deserving Design as the HGTV program with interior designer Vern Yip. During the program, Kyle’s primary role used to be carpentry.

American model Kyle Carlson has an estimated net worth of US$3.1 million. He has experienced a successful professional journey as a model alongside his twin brother Lane Carlson as “Carlson Twins. They are counted in the list of the most successful American twins as their contribution to the modeling industry is very crucial. Recently, there have been more male models within the industry. However, every once in a while there are two models who are twins. They have grabbed success with their identical appearance.

How tall is Kyle Carlson?

Kyle Carlson stands at a tall height of 6 feet or 183 cm. He carries all the essential traits that one needs to possess during the course of a modeling journey. He has blue-colored eyes and brown-colored hair.

The individual biography of Kyle is still missing from Wikipedia but the bio of the Carlson twins is prepared on Wikipedia now. Find him on Instagram @kylecarlson, however, this profile is not officially verified.